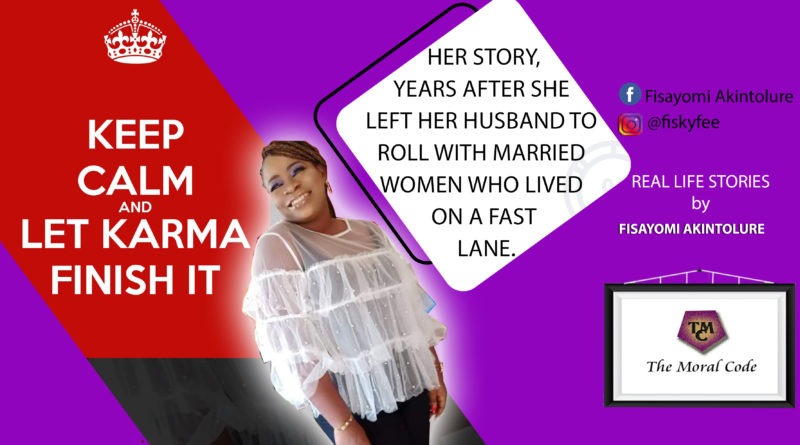 This series will be telling a lot of stories. All true life experiences of people I know and have met one time or the other.

When we were children, my mom had very few friends, but one we all remembered was mummy Dele.
They’d gone to primary school together in their village, but got separated as everyone left after completion of that stage and traveled to different states for further education or a different sort of life.

Years later, as a married woman, my mom ran into mummy Dele in Ajegunle and they got a little close, since they had history. Her kids will visit us and occasionally after a lot of complaints from her, my mom will let us visit her too. The two families kinda formed a bond.

At some point we knew some things went down and we all changed environments again. But we didn’t know the nitty gritty details till we were older and my mom told us about it after my oldest brother ran into her somewhere in a pitiable state.

My mom’s story:
Apparently, she’d started to roll with some married women who lived on the fast lane. There were the ones who practiced keeping their husbands subjugated through diabolical means(forget your wokeness,we were Africans first of all) so they can cheat and make enough money to buy clothes and jewelry. Some, just for the fun of it. They had clubs and held meetings once a week or month. They had competition in clothes and jewelry. Each time a member had a party, they all must buy clothes, attend, contribute money and pay it forward.

These were women whose husbands weren’t wealthy. Just mostly average and even below. Civil servants and artisans. Most of these females were either traders themselves or full time house wives. So definitely, their source of income couldn’t provide the excesses they wanted. So, cheating was the way out. Staying married while cheating and not getting kicked out or caught (as divorce was still a bit shameful at the time) was also a norm, so they needed help to achieve this…that’s where spiritual fortification came in. White garment churches, Islamic clerics and herbalists… Were their customers. Some even slept with these men in exchange for the services or products they needed.

So when mummy Dele met these women and became enamored with their lifestyle, it was easy to have her ensnared. They taught her the ropes and she jumped at it. She told my mom, who warned her against such practices and it’s resultant effect. Cos karma always calls.
When she met her own “boyfriend” and will even come back home with fresh fish gifted her by him to cook for her husband and children, after her tryst with him, my mom didn’t stop her preaching as she’d come regale her with stories of her “good time”. She got tired of and was advised by her new friends against my mom’s “holier than thou attitude”, she stopped coming over and the friendship waned.

What was left were stories my mom gleaned from usual gossips on the street as people knew they had a close relationship.
Mummy Dele did move out of her husband’s house to live with her new man. Daddy Dele who loved his wife so much (or something) hired a vehicle and went to the new husband’s house to move her things back to their home. Of course she fought him but man was too in love to care. She’d go back, he’ll go for her again. This back and forth happened a lot of times.

The husband became a drunk and a butt of joke. But he couldn’t care less. Thankfully his job wasn’t affected, as he rose to the position of head master in the government primary school sector, where he worked as a teacher.

At the time, my older brother ran into her somewhere. He said he was confused he had to step back to look properly and even called her name before he confirmed it was her.
She was sitting under the stairs of a house where he’d gone for a party. They’d given her food she begged for and she was eating with her hands. From stories he gathered, she was mentally unstable at the time.

When he came visiting, as he was in the university at the time, he told my mom the story and she cried for her friend and her likes who towed the path at the time.
One day, years later, my mom ran into she and her oldest daughter, Aunty Dele at the MFM prayer city. Their father had eventually died, a man broken for the love he had for the wrong woman. The woman, a ghost of her former self as karma had really come to visit. She was mentally deranged and incoherent. But her children who’d turned out well, as their father hadn’t relented in that area, were saddled with the responsibility of caring for her.

After exchanging pleasantries, the daughter took my mom’s hands and walked her to the car while they talked and she spoke painfully of her parent’s story, her mother’s regrettable actions and her words and tone were laced with nothing but hate when she mentioned their mother. She categorically said taking care of her was because she’s a Christian, a promise to her father and for humanity. If she had her way, she’ll let her waste away wherever and be buried by the government when she dies. My mom scolded, encouraged and then prayed for her.

We learned of her death a few years later.

Fisayomi Akintolure is a teacher with over 15 years of experience, she’s passionate about public speaking and wants to see a world where everyone is treated equally.