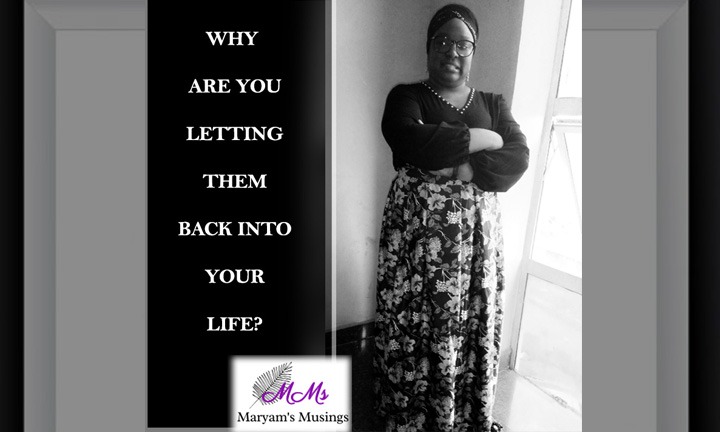 Let me just start this by saying that in truth, the best predictor of current or future behavior is past behavior. There are behaviors people consistently show us that we don’t need to make excuses for.

So there was this guy that acted like he liked this lady, he seemed serious and all, those good looking Abuja boys that are not sure what they want in life, because that’s how the story turned out in the end. Dude won’t make out quality time for her, but she was still hanging on that okay he’s just busy bla bla bla, another nonsense we all tolerate sometimes because the truth is if you are priority to someone they’ll make time for you, except they don’t eat or use the loo then yes they are that busy. Anyways, dude continued in that path till she got fed up and shut him out for good. Months later he shows up again chatting her up, see eh there are some chats on this earth you should block without thinking twice. Well he was all like how was she, they got talking again and barely two weeks into talking dude needed a car loan from her. Past behavior showing up in future behavior, he still wasn’t legit.

In my diploma days a lady was raped and murdered during one of our holidays, while we were home, news was being shared of her death. People from my school will remember that sad story only too well. She traveled to Abuja to visit her sister, someone visited her, someone she knew and invited in, he raped her and stabbed her in the neck (if I recall well) with scissors. If she was found earlier she might have survived. Guess what, the guy responsible was a fellow student in our school. I hope he’s still in prison.

A guy somewhere, before he became an orphan had a friend his parents treated so well, now after their death as mid adults, friend was living in another country and invited our guy over for hustle, our guy gets there and two days later maltreatment starts. Our guy leaves and God blesses him with another helper in same country, our guy becomes well to do and returns to Nigeria. Old friend sees his progress on Facebook and hails him, saying he’ll like to visit him as he’s coming to Naija. Our guy was asking on a public forum what he should do? Hehe? You still dey ask?There are people you tell straight up, please I don’t wish to have anything to do with you! Your home is a special place, don’t be bringing in any kind of energy in there. And if your heart is just so soft, please love that Frienemy (friend like an enemy) from afar.

Who are you letting back in and why? How many years has separated you from the person that has suddenly showed up trying to talk to you? Years and the time apart is enough reason not to just allow anyone back in. You don’t know where they have been or what they have been doing.
Why did they also become strangers to you? Would their coming back benefit your life or cause you stress? Was there something from before they did you considered questionable? What is your gut telling you about them?
Gut feeling is your internal alarm system against danger.

I’ll just end by saying. While we can try to follow our instincts and guts. We must say a prayer often to God, to protect us from those devils who have learned perfectly to disguise as angels. Because sometimes the enemy is not even the one we afraid of letting back in, sometimes they are the ones already with us as the ones we love and trust, the pain from that kind of betrayal lives with you forever.

Thanks for reading. I’m Maryam Abdulrasheed the convener of The Moral Code. I love to think, read and write. I love observing and listening to people, I love creating content and I’m an active pursuer of my dreams. Follow my page social media pages The Moral Code on Facebook and Instagram, it’s free to follow with just the tap of a button.