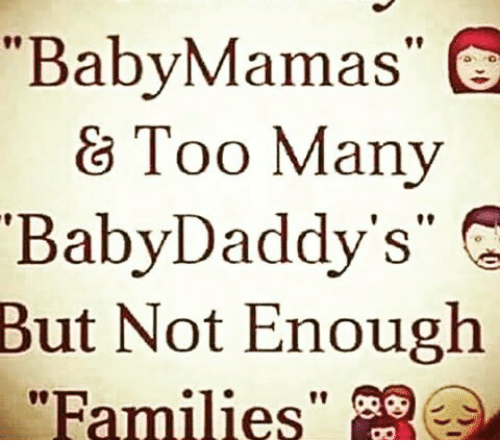 Back in the days, the news that a young lady got pregnant through premarital sex provoked a certain kind of reaction, of dissaproval. No one needed to tell you that getting pregnant or impregnating someone before marriage was simply unacceptable conduct. The fear of the associated stigma ensured you kept your legs together and your knickers, zipped up.

But today, the narrative has changed. More and more celebrities and people who shape opinions are even the ones now spear heading the trend. What we now see is a society filled with men who have three or more kids from different women and women who are now comfortable being called ‘baby mamas’.

The crazy thing about this trend is, it seems the ladies who are most times dumped after having the babies have no problem with this bizarre practice as most of them jostle to be baby mamas to male entertainers.
Change is constant they say. But certain changes are worrying and present threats to our common existence.

There is no clear definitive point of entry of baby mama/ baby daddy culture into Nigerian society. It was more of a gradual blending in. A generation ago, having a child before saying your vows was frowned upon and in some cases not tolerated.

The trend has even evolved from being just a celebrity thing, to even common men. Many girls you meet in the street today, have a child waiting for them at home or with their parent, and they are not even married to the fathers of these kids.

What could be the cause of this rotten trend that has now eaten deep into our today society?

I believe personally, that it all boils down to the falling standard of our morals, as a society today. Back then, most girls won’t even get into an intimate relationship with a man who has not yet performed the necessary rites of marriage on her. But that is not so anymore. The turn of the millennium saw a loosening of the moral codes that had existed decades ago. The parents of young Nigerians are slightly more liberal than their folks were.

Most ladies believe that when they get pregnant for a man, it is an ultimate ticket/assurance for marriage. They don’t know that times are changing. Men don’t care anymore. If you get pregnant for them, they would gladly take responsibility for the child, but still not guarantee you marriage, if they don’t want to.

Most times, it could also be a deliberate decision, as most of these baby mamas or papas, had already decided that they do not want to get entangled with anyone in marriage, but just have babies, to keep on their legacy, when they are no more.

While this practice rages on, the society bears the brunt of this menace. Apart from it being ungodly, it debases womanhood as the men now see young women as just a means to making babies but not good enough to wife.

If this trend continues unabated , the society would soon be filled with kids from single homes which are at the risk of developing behaviorist patterns inimical to the larger society. Let us be frank with ourselves, a child needs both parents as well as the love and safety a family provides for proper development and for them to become productive members of society. If one should now be absent, then there is a very big problem.

Most of these kids may even be taunted and called different names by their peers. Just imagine a child being called a bastard! That’s negative signal to the mind of the child already.

Another implication of this ugly trend, is the fact that the child involved could grow up to hate either men or women, depending on which parent was absent.

The downside of all these is that in the nearest future, the society would be filled with individuals with no proper moral backing from both parents, thereby dwindling the morals we hold dear as a society.

We totally cannot eradicate this new trend that has come to stay, but can only try our best to educate our wards on the proper way to do things, so we might come back one day to the high standard of morals we once had as a society.