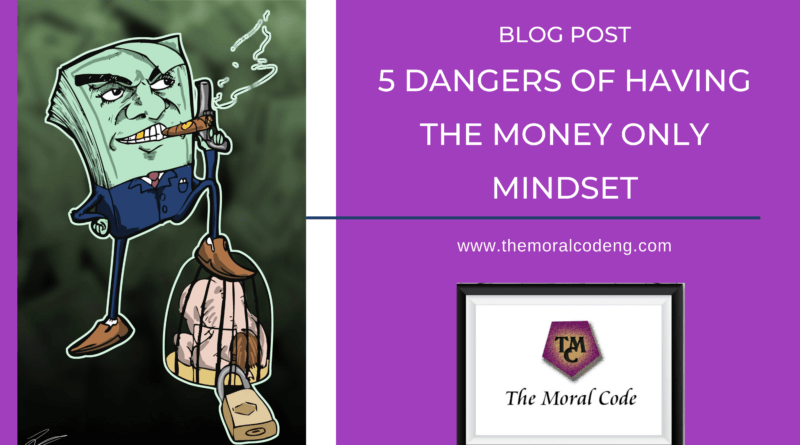 Money is good, we know this. If we all had a choice, none of us would want to live in Penury. But life happens and while some may be born poor the choices we make through life will determine if that status would change.

Success means different things to different people, sadly though one of the reasons for this post is that in a country like Nigeria too many youths have the money mindset, this is their sole mindset and with this comes many problems which come back and destroy our society. So here are 5 Dangers of Having a Money Only Mindset.

Note that this post is with a focus on having the money mindset for the wrong reasons and pursuing that mindset through the wrong means.

1. YOU COME OFF AS GREEDY AND SCARY

When a person is solely all about money, having it, gaining it especially with an aim that’s targeted at gathering material things, the latest gadgets, cars, clothes and worst of all to show off and oppress others, they not only look really greedy they begin to look scary to those around them.

Scary because, people who have worked to earn their money, through legit and honest means will see an inner monster living in the person with the money mindset. They will find them scary as they see someone who will likely be willing to do anything to achieve their aims, hence they may not feel safe around them. Suffice to say coming off as having a money mindset makes one look shady.

The only money mindset person, begins to exhibit this in their actions and will manipulate and cheat others, as long as they get the money, they don’t care who feels bad, they destroy their relationships with others.

The money only mindset person will be glad to lend money they don’t intend to return to purchase things that are liabilities and not assets.

3. THEY SPOIL THE COUNTRY’S NAME OUTSIDE

The nature of crimes those that have been caught outside the shores of Nigeria were involved in, include human trafficking, drug peddling, fraud, robbery and other similar morally bankrupt acts.

The nature of these crimes in themselves portray the minds of the perpetrators as being having sick levels of money only mindset. Blinding them so much that they forget their names and family names which would be tarnished, they forget they could lose their lives as some of these countries have stringent punishments for crimes such as drug peddling. They only think of all the money they would make. Ultimately also, money only mindset people spoil the image of the country and indirectly hamper other honest citizens from having opportunities abroad.

4. READY TO CHEAT OTHERS & GAIN MONEY THROUGH ANY MEANS.

The increase in kidnappings, armed robbery, and fraud also known as yahoo yahoo, the increase in ritual killings means the number of persons with the money only mindset are on the rise. This means a more dangerous society for us all. Because the innocent are often the victims.

5. WILL SQUANDER MONEY AS MINDSET CAME FROM WRONG PLACE.

A person with the money mindset fails to understand the value of money, or investment. They want irrelevant and empty things. They want money for purchase of produced things but do not think like producers.

No matter the amount a money only mindset person comes by, they seldom are able to grow further and will more likely return to where they started as a wrong mindset will always mean a wrong set of actions.

Money, can actually right many wrongs of our society, but only in the hands of the right people, with the right values otherwise our woes have just begun.

You can download a free e-book on this blog titled THE SIDE HUSTLE BOOM here This book gives everyone pointers to business they can start, gaps around them they can fill for money, some tips to increasing your client base if you already own a business and offers job search tips to those who are job hunting. Everyone can find something useful in here, and it’s free.

The Moral Code is here to add a voice in correcting the moral decadence prevalent in society. So do help the effort by sharing posts from this blog.