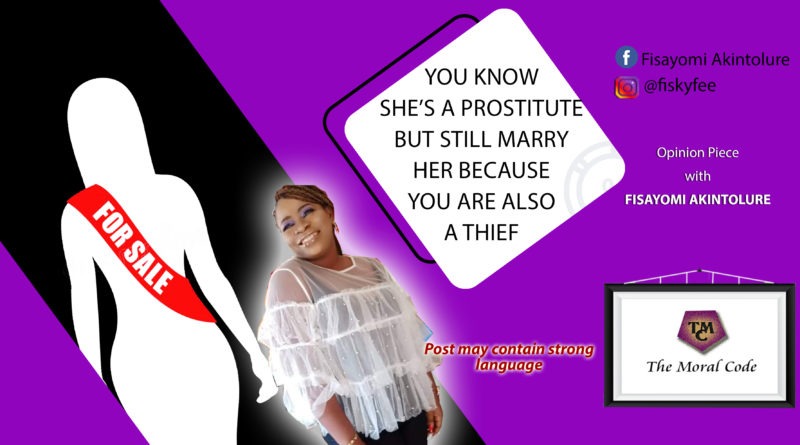 Few months ago, a husband and wife ousted themselves. Wife was a coded olosho (Prostitute).

You know those classy educated types with powerful jobs on the island. I’m not talking some half literate girl who doesn’t work. I’m talking the girls who wears power suits, speaks through their noses, have skin like porcelain and eats at five star restaurants… Yes those classy, perfect etiquette types.

She was before they married and continued after wedding. Hubby knew but ignored, because her extra curricular activities paid for the life he wanted. Living amongst their rich friends, flying around the world for holidays, etc.

I’ve seen how men act around rich people and in most cases it’s appalling. They’re the ones who raises hands up, hailing and screaming “chairman”…most straight men will literally take their pants off for a fellow man once he’s got a well pampered skin, perfume that smells wealthy and a bank balance that shows money.

They’ll forget their bedroom preference at that point in time.

Now the simple truth is, most ladies are single in their thirties because there are too many men looking for rich girls to marry. They don’t care if your income doesn’t compliment your lifestyle. They’ll pursue you like white on rice.

The trend now is; they like decent girls, but they don’t want decent wives who can’t wear a million naira on her body daily.

You draw more attention when your wig is 150k, your iPhone is 450k, your bag is not knock off Chanel and your shoes are the real red bottoms by Christian Louboutin.

Even when you either don’t have a job, have a “bizness”, sells hair, sells clothes, work in “one small company”, or even earn 40k as a cashier on contract with GTB or UBA.

Fisayomi Akintolure is a teacher with over 15 years of experience, she’s passionate about public speaking and wants to see a world where everyone is treated equally.